A celebrated book of short stories and a nonfiction book exploring racism encountered in transportation systems in America have been named the 2022 winners of the Lillian Smith Book Awards, which honor the top literary and scholarly works dedicated to issues of social justice. 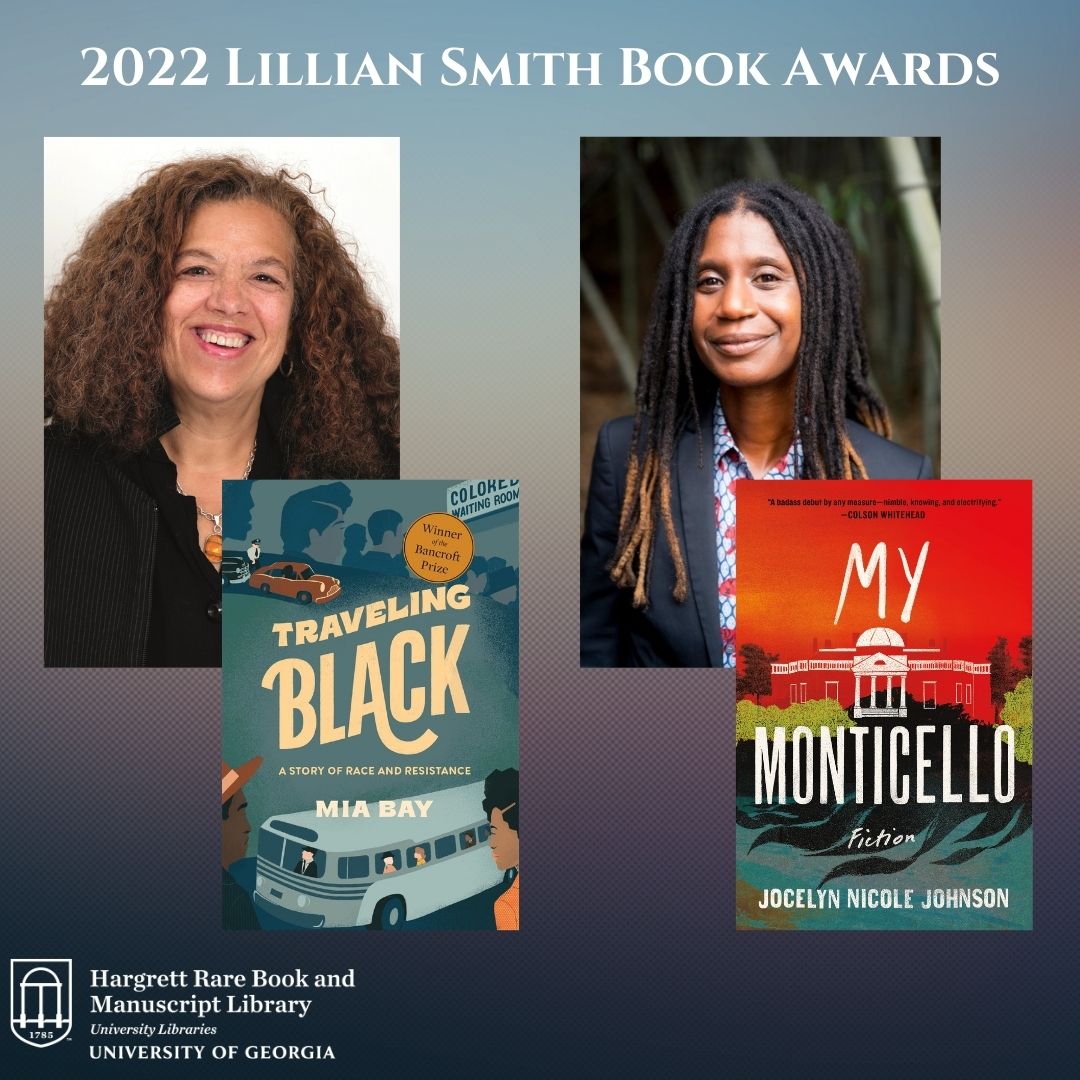 My Monticello author Jocelyn Nicole Johnson and historian Mia Bay, who wrote Traveling Black: A Story of Race and Resistance, will be recognized this fall for the awards, administered by the Hargrett Rare Book and Manuscript Library at the University of Georgia in partnership with the Southern Regional Council, the Georgia Center for the Book, and Piedmont College.

“Through different genres and styles, this year’s honorees stand firm in the legacy of Lillian Smith and other honorees whose books have ignited conversations and furthered the cause of social justice,” said Katherine Stein, director of the Hargrett Library, one of three special collections units of the UGA Libraries. “Traveling Black addresses the challenges of Black mobility in the segregated American past while My Monticello provides a fictionalized portrayal of how racism and classism can unravel society.”

Bay is the Roy F. and Jeannette P. Nichols Professor of American History at the University of Pennsylvania. In addition to Traveling Black (Harvard University Press), she is also the author of To Tell the Truth Freely: The Life of Ida B. Wells and The White Image in the Black Mind, and coauthor of Freedom on My Mind: A History of African Americans, with Documents.

Johnson, a public school art teacher from Charlottesville, Virginia, has received a number of accolades for her fiction debut. My Monticello (Henry Holt and Co.) has been named a finalist for the Kirkus Fiction Prize, the National Book Critics Circle Leonard Award, the LA Times Debut Seidenbaum Prize, and was long-listed for a Pen/Faulkner Fiction Award and the Story Prize. Johnson has been a fellow at TinHouse, Hedgebrook, and the Virginia Center for the Creative Arts. Her writing has appeared in Guernica, The Guardian, Kweli Journal, Joyland and elsewhere. Her short story “Control Negro” was anthologized in The Best American Short Stories, guest edited by Roxane Gay and read live by LeVar Burton.

Named after the acclaimed author of the controversial 1944 novel “Strange Fruit” and other works, the Lillian Smith Book Awards recognize works that examine issues of race, social justice, civil and human rights, the education and socialization of young people, breaking silence among repressed groups and matters that are significant to the changing South. The awards have recognized books by leading academics such as Henry Louis Gates Jr., activists like John Lewis, novelists from Tayari Jones to Eudora Welty, and other writers, such as poet Natasha Trethewey.

The awards were established in 1968 by the Southern Regional Council after Smith’s death. The University of Georgia’s Hargrett Rare Book and Manuscript Library has administered the program since 2004.